Recently I have been working on a new feature for my app, FoodNoms, called "recipes". Recipes let you combine multiple food items into a single, composite food item. It's useful for things like protein shakes, baked goods, or homemade dishes. It's actually a pretty common feature for food tracking apps like FoodNoms, and it's naturally been one of the top requested features.

Recipes is actually a pretty straightforward feature. Other than the necessary UI changes, it's just math! Effectively, all I need to define is the sum operation for food items.

Though it's not as simple as summing each nutrient; I want to preserve as much portion data as possible, e.g. calories per 100g. When I sat down to figure out how to implement this correctly, I grabbed pen and paper and did some quick algebra.

When I tested the logic on my device, I realized that my initial implementation wasn't correct for some cases (yay non-minimal state). These moments are typically when I would go into the debugger and inspect the state of my models in order to get an idea of what might be going wrong.

The workflow of debugging models and state in Xcode leaves a lot to be desired. My typical workflow is:

When lldb and Xcode are sluggish on my 2018 MacBook Pro, this workflow makes it quite slow and painful to iterate.

Perhaps I should be leveraging unit tests for situations like this. Still, I maintain that there's nothing quite as reassuring as seeing values from the actual app as it's running.

For the past five plus years I've been used to an entirely different workflow for debugging state. Tools like Chrome DevTools and the React Developer Tools have legit spoiled me. I can just point and click on any part of the UI and observe the state change in realtime. Also, Chrome's console UI is leagues ahead of lldb's interface, with actual log levels, color coding, interactive collapsible nodes, and powerful filter features.

After another frustrating debugging session last Thursday, I was motivated to try a little experiment. How much work would it take to recreate a tool that delivers a similar developer experience of inspecting web apps? Well, after a few hours I had this little demo and I shared it on on Twitter:

I missed the Chrome DevTools so much I built a live remote inspector for inspecting Codable model values in realtime. Supports collapsing nested fields and observing multiple models simultaneously. It also lets you forward logs to Chrome's console. Anything else like this? pic.twitter.com/i3Es0wDrKU

This tweet received a surprising amount of attention! It's clear that there is some sort of demand for more tools like this that make it easier to debug apps in realtime.

It'd be wonderful if Apple were to invest more in their developer tooling to make these workflows less painful. In the meantime, I figure I'd share some of my work here and try to explain how it works.

There are three main components to this setup: the Swift client code, a Node.js WebSockets server, and a React frontend.

All communication between the three components is done via WebSockets. There are three WebSocket message types: "subscribe", "update", and "log".

The Node server acts as a central router for these messages. It listens to "subscribe" messages from the frontend to create a pool of clients. Then when it receives "update" and "log" messages, it passes those through to all of the subscribed clients.

The Swift app sends "update" and "log" messages via a URLSessionWebSocketTask task. The "update" message contains an identifier and a JSON-encoded copy of an Encodable struct. In my app, I'll typically place a call to send an update message inside a property's didSet callback or inside a constructor.

FoodNoms already uses Willow for logging, so adding a new LogWriter to push logs to the server in debug mode was trivial. Willow supports log levels, and most of these map to browser console log levels. When the frontend receives log messages, it attempts to map those to an appropriate console method with a fallback to console.log.

In order for the iOS app to communicate with the Node server, the app needs to know the WebSocket server's local IP address and port number. I also wanted a toggle to control the connection state and an option to connect automatically on app launch. To support all of these settings, I implemented a little settings screen in SwiftUI that can only be launched when building for development: 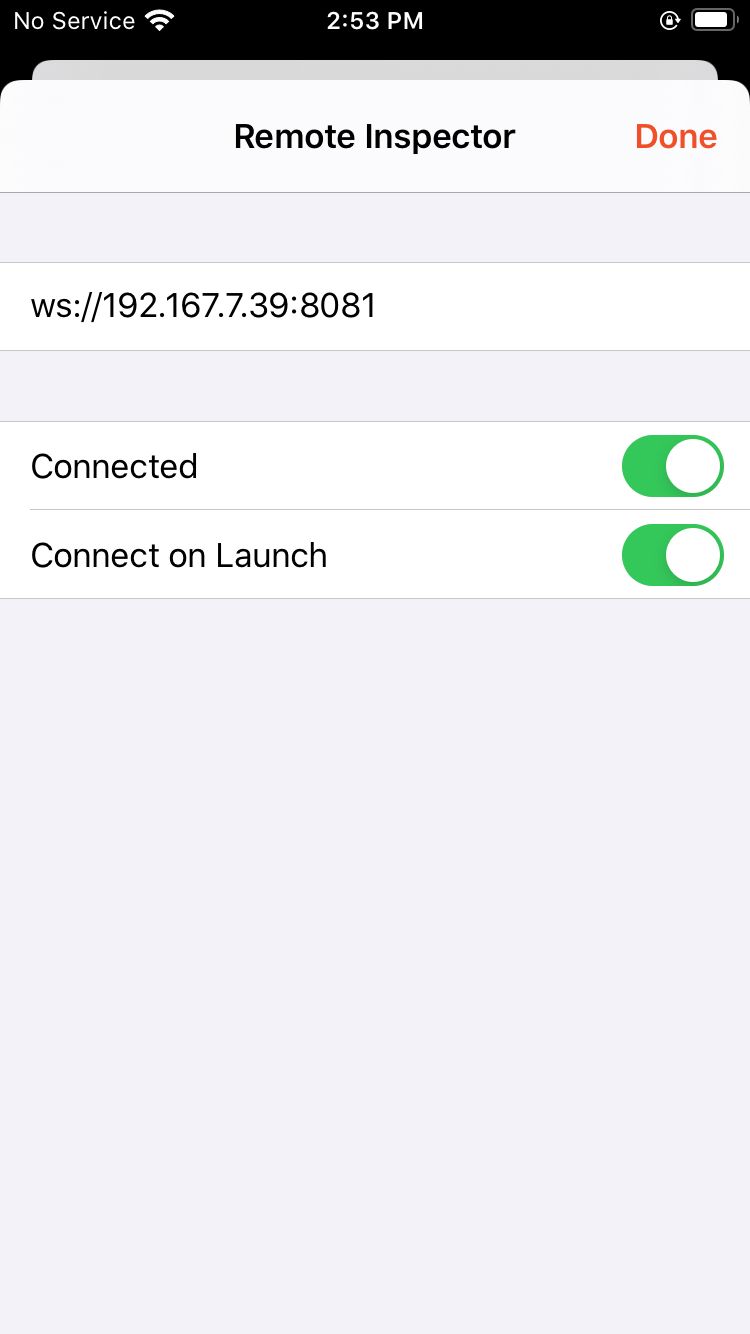 When an "update" message arrives at the React frontend, the message is merged into a larger, long-lived JSON object. Newer values replace older values with the same identifier, without modifying other observed values.

On the client, the merged object is rendered using a wonderful library called react-inspector, which emulates the expandable object UI in Chrome DevTools.

I decided to use a zero-configuration bundler, Parcel, for compiling and serving the React app.

I asked on Twitter if there are similar things to what I built. I was surprised that there isn't more tools like this already out there. The only tool that anyone brought up was PonyDebugger by Square, which hasn't had a release in 5+ years. I haven't tried PonyDebugger out yet, but it does look quite interesting!

I'd love to hear from the PonyDebugger maintainers what they learned from working on the project, and what they think about the state of realtime debugging iOS apps in 2020.

I am not interested in sharing this code on GitHub, let alone building a reusable library for all of this. But I'm totally fine sharing some code snippets here. Note that this code is not super-duper production ready™ and it will need to be modified to work for your needs.

All code here is licensed under the MIT License (Copyright (c) 2020 Ryan Ashcraft). See MIT license below at end of post. 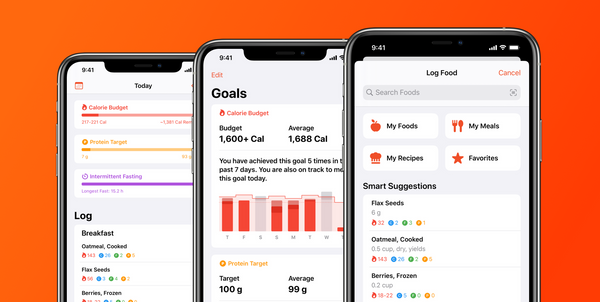 A retrospective on the first two months of FoodNoms and plans for the next few months.

Solving the mystery of controlled navigation in SwiftUI.